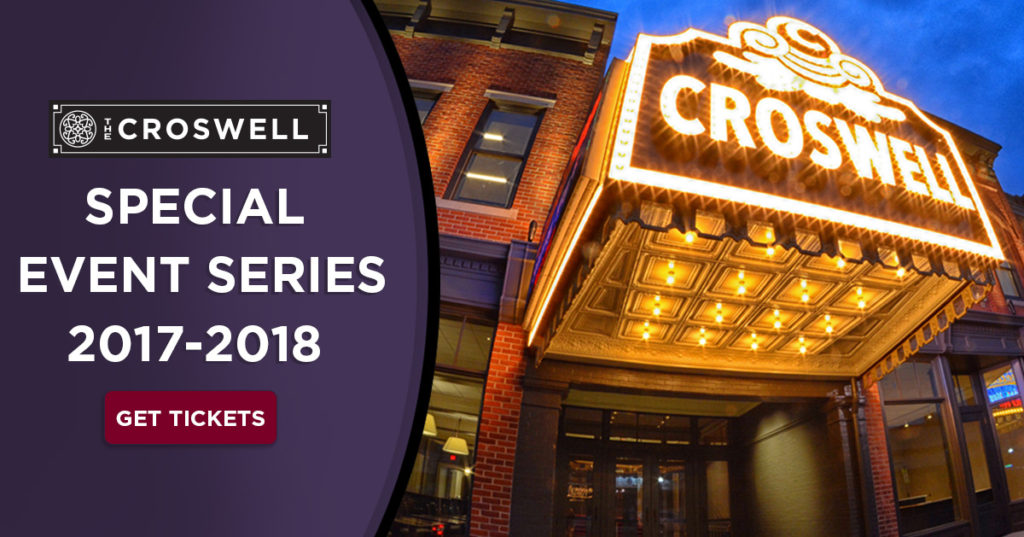 We’re proud to be announcing a great lineup of shows for our 2017-2018 Special Event Series! Tickets for previously announced events are already on sale; tickets for all other events will go on sale Monday, October 9.

October 13-22: The Family Digs. The world premiere of a brand-new work by Michigan playwright Terry Hissong.

October 28: Dueling Pianos. The Dueling Pianos from 176 Keys return to the Croswell for one night only! On-stage seating is available.

November 4: All Or Nothin’. The Croswell is pleased to present the local premiere of a new movie by Ann Arbor filmmaker Charles Campbell. In 1853, 28 slaves escaped from Boone County, Kentucky, to seek freedom in Canada. This movie, which was partially filmed in Lenawee County and includes a portrayal of beloved local icon Laura Haviland, is their story. (Admission to this event will be by donation.)

November 25 to December 10: Meet Me in St. Louis. Based on the MGM film of the same name, this is the heartwarming story of a turn-of-the-century American family anticipating the wonders of the 1904 World’s Fair.

December 21: Carols and Candlelight with Michael Lackey. Join us for an exclusive evening of holiday favorites performed cabaret-style in our new studio theater by Broadway veteran Michael Lackey! Seating is very limited.

January 27-February 3: Godspell. This Tony-nominated classic by composer Stephen Schwartz (Wicked, Pippin) brings the parables to Jesus Christ to live with a parade of beloved songs. Directed by Michael Yuen, who played John the Baptist and Judas in the 2000-2001 national tour of the show, this is the Croswell’s annual all-area high school musical.

February 14: You Rock, Valentine! Celebrate Valentine’s Day with dinner from the Hathaway House and a collection of hits performed by the Croswell’s own Dave Rains. Seating is very limited.

February 24 to March 4: The Big Meal. Somewhere in America, in a typical suburban restaurant on a typical night, Sam and Nicole first meet. Sparks fly. And so begins an expansive tale that traverses five generations of a modern family, from first kiss to final goodbye.  The Big Meal spans 80 years and five generations in the life of one American family. The play won author Dan LeFranc the 2010 New York Times Outstanding Playwright Award.

March 23-31: Stellaluna and Other Tales. Stellaluna the bat, Verdi the snake, and Pinduli the Hyena all seek refreshment at a watering hole one hot day, only to find themselves the subjects of a bullying lion’s ridicule. But by sharing stories about building self-confidence, these three misfit animals find wisdom, peace and friendship. Based on the books by Janell Cannon, this delightful musical is a treat for children and adults alike.

April 7: Disco Night at the Croswell. Toledo-born singer-songwriter Tatiana Owens returns to the Croswell stage for a fun-filled evening of disco hits from Donna Summer, Sister Sledge, the Bee Gees, and more!

April 28: Ben Daniels Band. The Michigan-based Ben Daniels Band has become a favorite at venues like The Ark and The Blind Pig, as well as at concert halls around the country. This will be the band’s first Croswell appearance.