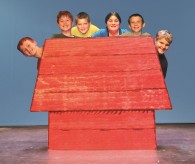 The Croswell Opera House has announced the cast for its upcoming production of “A Charlie Brown Christmas,” which will open Thanksgiving weekend and run through Dec. 7. The part of Charlie Brown will be played by A.J. McClellan of Adrian, with Snoopy played by Payton Perry-Radcliffe of Adrian. Rounding out the all-student cast will be […]