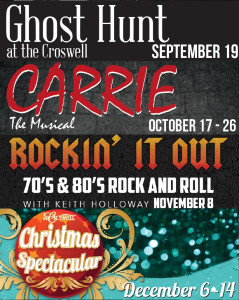 Two rock concerts, a beer-tasting event, and the off-Broadway revival of “Carrie: The Musical” are on tap for the Croswell Opera House’s special event series, which begins this month and runs through April.

Ghost Hunt at the Croswell: Paranormal researcher Jeff Westover, the author of “Ghost Highway,” will present photos, videos and details about his research, which includes the Croswell and other theaters and venues. The event will take place at 8 p.m. Friday, Sept. 19, during downtown Adrian’s Art-A-Licious festival. Admission is free; refreshments and a cash bar will be available.

Disney’s “Frozen”: The Croswell will screen Disney’s 2013 big-screen adventure “Frozen” at 11 a.m. Saturday, Oct. 4, as part of the Spectacular Saturday Series for elementary school-aged children. Admission is $5 for adults and free for youth 15 and under. Kids who arrive between 10 a.m. and 11 a.m. can have their photo taken with Elsa before the show.

“Carrie”: The Off-Broadway revival of “Carrie: The Musical,” based on the novel that launched Stephen King’s horror career, hits the Croswell stage just in time for Halloween. This chilling musical tells the story of Carrie White, a bullied teen whose telekinetic powers lead to tragic consequences. The show runs Oct. 17-26, with Friday and Saturday shows at 7:30 p.m. and Sunday matinees at 2:30 p.m. Tickets range from $15 to $35; suggested audience is ages 13 and up.

Tim Burton’s “Frankenweenie”: This is Tim Burton’s stop-motion adaptation of a classic Disney story. When a car hits young Victor’s pet dog Sparky, Victor decides to bring him back to life – but when the bolt-necked “monster” starts wreaking havoc, Victor must convince his neighbors that Sparky’s still the good, loyal friend he used to be. Part of the Spectacular Saturday Series, “Frankenweenie” offers one more chance to get some mileage out of those Halloween costumes, as kids who show up in costume will receive a prize. The movie starts at 11 a.m. Saturday, Nov. 1. Admission is $5 for adults and free for youth 15 and under.

Rockin’ It Out: The Croswell’s house band, featuring Croswell favorites Eric Parker and Kyrie Bristle, will present a night of ’70s and ’80s rock at 8 p.m. Saturday, Nov. 8. The night includes a cash bar and costume contest. Tickets are $20 for main-floor seats and $15 for balcony seats.

“A Charlie Brown Christmas”: This family-friendly Christmas favorite brings Charlie Brown, Snoopy, Linus, Lucy and the rest of the “Peanuts” gang to the Croswell stage. The show features a jazz trio playing the now-famous music from Vince Guaraldi, as well as a few traditional carols. The show runs from Nov. 29 to Dec. 7, with shows at a variety of times to accommodate different family schedules. Tickets range from $10 to $25.

The Croswell Christmas Spectacular: In the vein of last year’s “45 Summers at the Croswell,” this show will feature many familiar faces as Croswell performers come together for a holiday-themed musical revue. Starring Michael Lackey as the featured singer and master of ceremonies, the Croswell Christmas Spectacular includes the Lenawee Rockettes, a host of favorite Christmas carols, and a special appearance by Santa. The show runs Dec. 6-14, and tickets range from $15 to $35.

All-area high school musical: A Croswell favorite since 2010, the annual all-area high school production gives students from across southeast Michigan and northwest Ohio a professional-level theater experience. The title of the show won’t be announced until Nov. 24, but preparations are already underway, with more than two dozen area students posed to join the cast. Show dates are Jan. 31 to Feb. 8. Show times the first weekend will be 7:30 p.m. Saturday and 2:30 p.m. Sunday, followed by three shows the second weekend, at 7:30 p.m. Friday and Saturday and 2:30 p.m. Sunday.

“Rosa Parks and Forgotten Friends”: The final installment in the Spectacular Saturday Series, this touring show by North Carolina-based Bright Star Theatre celebrates the life of civil rights pioneer Rosa Parks, who will lead children on a journey through history, including figures like the Tuskegee Airmen, Buffalo Soldiers, Sojourner Truth, and Frederick Douglass (who once spoke on the Croswell’s stage). The show will be presented at 11 a.m. Saturday, Feb. 7, with a craft project before the show from 10 to 11 a.m. Tickets are $12 for adults and $5 for youth 15 and under.

“The Cat in the Hat”: Not a word has been touched or added in this live-stage adaptation of the Dr. Seuss classic, ensuring anyone who’s read the story will find themselves transported into the world they’ve always imagined. “The Cat in the Hat” runs from Feb. 20 to March 1, with Friday and Saturday shows at 7 p.m. and Sunday matinees at 2:30 p.m. Tickets range from $10 to $25.

St. Patrick’s Day Celebration: The Croswell will celebrate St. Patrick’s Day by offering a craft beer and cider tasting with brewers from across the region. Guests can also take to the Croswell stage for karaoke, and instruments will be provided. The event begins at 8 p.m. Saturday, March 14. Admission is $15, plus drink tickets, which are $10 for five tastings.

“Love, Loss, and What I Wore”: This play by Nora and Delia Ephron features a cast of five women using clothing and accessories to provide windows into their memories and lives. The play runs March 21-29. Show times the first weekend will be 7:30 p.m. Saturday and 2:30 p.m. Sunday, followed by three shows the second weekend, at 7:30 p.m. Friday and Saturday and 2:30 p.m. Sunday. Tickets range from $10 to $25.

Rock Legends with Billy McGuigan: This audience-driven show takes a journey from the ’50s rock of Elvis and Patsy Cline to the psychedelic ’60s, the groovy ’70s and even a little bit of the ’80s. The show is at 8 p.m. Friday, April 17, and tickets are $25 for main-floor seating and $20 for the balcony.

What people say about the Croswell

“You must visit this beautiful historic opera house and enjoy one of their enchanted performances.”

"The performances are high-quality ... I have never been disappointed by a show at the Croswell."

"If you get a chance to see a production at this stunning historical theater, do it ... I have seen shows on Broadway and the Croswell is right in that caliber!"
Read more reviews »

The Croswell's 2020 Season is presented with generous support from the Michigan Council for Arts and Cultural Affairs, with the help of funding from the National Endowment for the Arts.